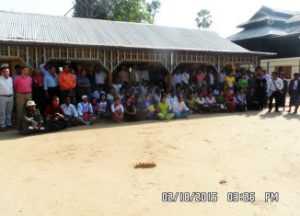 As we all know, May Day symbolizes the common struggle of workers worldwide. On the occasion of May Day 2017, the brothers and sisters trade union federations salute the gallant working men and women of Myanmar and urge them to rededicate themselves to the true ideals, values and aspirations of May Day.
A few years ago, we cautioned Myanmar’s working people against turning May Day into an annual ritual of workers congregating on to merely parade. Instead, it should be a cooperative demand for freedom, democracy and justice for the country’s people.
Myanmar is currently facing several unique challenges as it moves towards a triple transition. In the political sphere, the country has moved from military rule to multi – party democracy; economic reform – to transform a largely centrally planned economy to a market based one.  Understandably, implementation and sustainable development remain a major issue.
The rise in temperature in Myanmar is expected to have negative impacts on agricultural production and food security. The highly productive deltaic and low-lying coastal rice cultivation areas will be exposed to increased salinity, coastal erosion and inundation. An increase in extreme high temperatures is already creating problems in the Dry Zone, for example the severe drought in 2009, which impacted major cereal crops. In 2016, severe drought diminished village water sources across the country and destroyed agricultural yields of peas, sugar cane, tomato, and rice.
The serious impact of climate change, has pushed individuals into the labour force. Many people who live in rural areas come to the city to seek employment and work from sunrise to sunset. This leaves vulnerable populations to sacrifice long-term betterment for immediate gain. For instance several children have abandoned school in order to work long hours, with some adolescent boys and girls finding work abroad through agents.

Basic human rights still remain a challenge for some living in Myanmar.  The rights for food, clean water and sanitation are essential, but at times are unavailable. Many individuals living in rural communities work many hours to get food and water, and there is no guarantee of fresh and nutritious food nor access to clean water.

All these challenges are not easy to solve. The AFFM – IUF believes that they can be solved by social partnerships, and achieved together through solidarity action. Decentralization is the key to the improvement of social dimensions.

The AFFM – IUF calls to the government for the following immediate actions:
– the design of social protection for agricultural workers who live in rural areas
– ensuring a system of insurance for crops, market and export
– laying out the plan for long term subsidizes to promote the social status of small farmer and agricultural workers
– speeding up the return process for the land that was grabbed by military regime

We AFFM – IUF, are ready for immense change and plan to use this democratization period as an era to usher in such change.